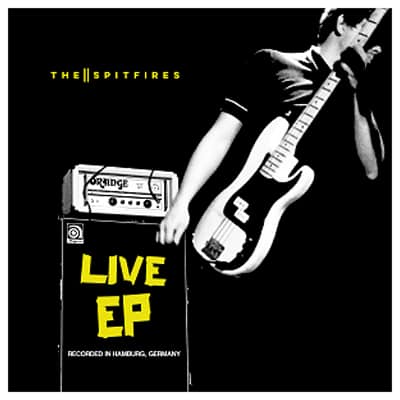 Tracks recorded at Monkeys in Hamburg on the band’s most recent tour of Germany.

Off the back of their 2018 acclaimed album ‘Year Zero’ and with a relentless touring schedule lined up for the Spring, The Spitfires are about to blend the explosive ruckus that is their live show, with their undeniably authentic rock and roll records. The Watford-based band have plucked 5 tracks from last year’s Hamburg gig to create their first release of 2019, a Live EP.

Renowned for their explosive live performances, The Spitfires have captured the ears and hearts of fans on a global scale. Their unique connection has resulted in unconditional loyalty across the UK and Europe, with shows selling out on a regular basis. The raw and downright relatable lyrics delivered by frontman, guitarist and songwriter Billy Sullivan strike a chord with many, and with the backing of Sam Long’s growling basslines, Matt Johnson’s foundation-laying drumming and keyboards and horns from George Moorhouse and Alistair Welsh respectively, it’s easy to hear why they have been deemed one of the most unstoppable rising forces in British music. On recording the EP, Billy added:

'We were really taken back by the response of the German crowds from the very first show in Hamburg back in 2015 and it’s great to see it grow as time goes on. We've always wanted to release some live recordings to capture the true sound of the band - no overdubs, no studio magic. You really do play off the crowd response so to record the show in Hamburg in 2018 was a no brainer!'

Blending everything from gnarly punk-driven controlled chaos to rock-steady breaks and ska-heavy goodness, the sound of The Spitfires is only identifiable to them and has resulted in a #1 album in the UK Independent Chart, a performance on BBC’s The Andrew Marr Show and countless tour dates across the world.

Now they are offering an unmissable collectable, a double 7” vinyl recording of what they do best – playing live in front of packed venue of their beloved fans – who’s in?